Buzzards are the UKs most common large bird of prey, found mainly in the western half of the country but now increasing their range into the South. They live in all types of habitat from open farmland to uplands with wooded valleys.

Frequently seen soaring in groups high in the sky on hot air thermals while emitting a distinctive mewing cry, they have keen eyesight, eight times better than humans. They usually hunt from low perches such as gate posts and fences, feeding mainly on small mammals and other animals.

They are sometimes mobbed by gulls and crows who see them as a competitor for their food. 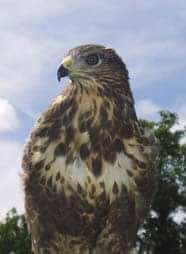