Britains most widespread reptile is also our only venomous one. It is found throughout mainland Britain, including some offshore islands, in a variety of open and man-made habitats. Although they have suffered somewhat from the reduction of moorland habitat in Britain, they remain relatively widespread.

Like most snakes, the adder can survive a fairly long time without eating, particularly in cooler weather and when hibernating over winter. It creeps up slowly on its prey and then strikes, biting and quickly releasing its prey. Its victim will succumb to the venom in up to three minutes and be swallowed whole. Their main prey are frogs, newts, lizards, small mammals and birds eggs.

Despite their venomous bite, adders will always attempt to flee from danger rather than confront it and its bite is rarely fatal for humans. Their main natural predators include buzzards and herons. 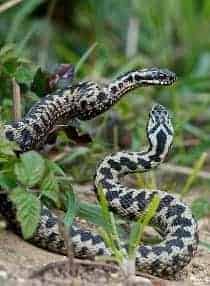