The barn owl is one of the worlds most widespread birds. It can be found throughout Africa, India, the Far East, Australia, USA, the Caribbean, South America and Europe, where Britain is the northern most tip of its range. Currently the UK population is in decline due to loss of habitat and prey species. Barn owls live in open country with some trees for cover and nesting sites. They usually become active at dusk, when they can be seen flying low over the ground in a slow, wavering flight with occasional short glides.

The barn owl is an expert hunter with excellent vision and hearing that enables it to pinpoint its prey in near total darkness. It flies low, slowly and silently and swoops to the ground at he last moment to grasp its prey with its sharp claws. Small rodents make up most of its diet. They are swallowed whole and later any indigestible parts are regurgitated in the form of pellets. Barn owls do not hoot, but both young and adults make snoring and shrieking noises when at the nest. 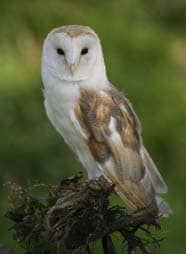