The largest species of owl in the world, the European eagle owl lives all over mainland Europe and is particularly concentrated in Scandinavia. Formerly found in Britain, it has been absent here since the eighteenth century.

Like all woodland owls it has prominent tufts on its head. These are not ears, which like all owls are hidden openings in the downy feathers on the front of the face. Instead, the tufts possibly have a role in display and attracting a mate.

They can live up to 40 years in the wild, even longer in captivity. Eagle owls are nocturnal and have excellent night vision and hearing to hunt in woodland areas at night. Their diet is entirely meat, consisting mostly of mice, voles and rats but their tremendous size and power also means they are easily capable of taking rabbits or even small deer. 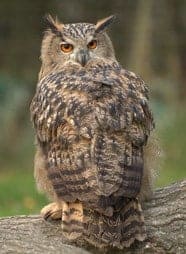