Fallow deer were first thought to be brought to England by the Romans, but the main introduction was by the Normans in the eleventh century for ornamental and hunting purposes. It is a docile, non-territorial, herding deer that thrives in parklands, making it ideal for semi-domestication.

Their current patchy distribution reflects the distribution of ancient deer parks and hunting forests. Feral deer (escapees from parks) are now common in southern England. Increasing in number and slowly in distribution, they are now found throughout much of England and parts of Wales, and locally in Scotland and Northern Ireland. Herds may number a hundred if conditions are right.

There are now more deer in the South East today than there were 500 years ago in the reign of Queen Elizabeth I. Fallow deer have palmate (palm-like) antlers – a wider and flatter spread with less distinct tines than the red deer. 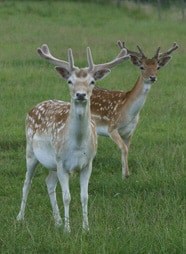