Originally from Spain and south-west France, the rabbit was brought to England in the 12th century AD by the Normans and kept in captivity in warrens as a source of meat and fur. Many escaped into the wild and eventually become so common that farming them was no longer economic. Helped by fast breeding, a diet of virtually any vegetable matter and persecution of predators, the rabbit slowly established itself in the wild in Britain, despite originally favouring a warmer, drier climate.

In the 1950s, the disease myxomatosis was introduced to curb their numbers and the rabbit almost became extinct, but is once again a common animal of the countryside. It can be a serious pest for farmers, eating and damaging crops.

The male is called a buck and the female a doe. The main predators of rabbits are the stoat and the fox, although young animals also fall to birds of prey and weasels. 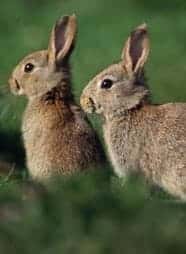