Roe deer are one of only two native species of deer in Britain and the most widespread today. They are rare in Wales and absent from eastern Kent and parts of the Midlands, but in southern England they are increasing in number.

They are active day and night, browsing in mostly woodland areas but may also be spotted in larger gardens in rural or suburban areas. Roe deer are fiercely territorial and the males, or bucks, will aggressively defend their territory, especially through the summer.

Threats in the wild are few, as their natural predators, the wolf and the lynx, are now extinct in Britain. Young fawns may fall prey to foxes or eagles, but most casualties are from traffic or farm machinery. Many young fawns will not survive the cold of their first winter, but those that do may live up to ten years in the wild. 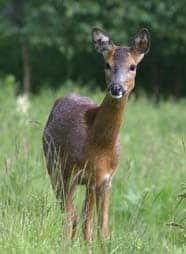