‘Ratty’ in The Wind in the Willows was not a rat at all, but a water vole. Sadly he is now the most endangered mammal species in the UK. Nearly 90% have disappeared in the last seven years, mainly due to habitat loss and predation by American mink. The water vole is found throughout England, Wales and Scotland, though their distribution is patchy.

Being semi-aquatic, it has flaps of skin over the ears to keep the water out when swimming. The water vole’s burrows usually have entrances about 8 cm in diameter both above and below the water. In Summer, vertical shafts are opened up near the river edge.

The voles feed close to these holes, mowing conspicuous ‘lawns’ around them. They will kick up a screen of mud in an attempt to escape predators such as mink, otters, stoats, weasels, brown rats, domestic cats, pike, herons and barn owls. 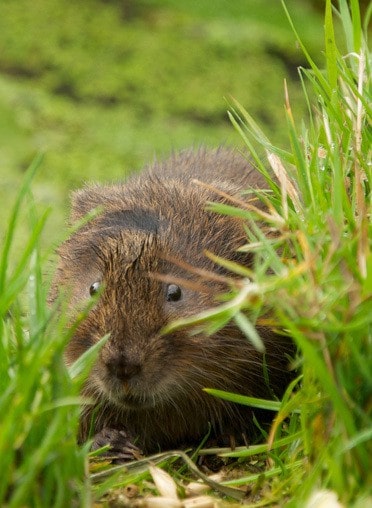 Description: Rich brown coat, slightly reddish on the back and greyish-ochre on the under-parts. Blunt nose and small ears almost hidden in the fur. Lightly haired tail and oily skin. It has prominent bright orange incisor teeth.